Together, Harms and Feldmann crafted the following lesson.

The first day was a “show and do” format. First up, Feldmann and Harms took turns showing the students how to code Dash to show the basic movements. They started with forward/fast by using the Reflector app to display the iPad with a projector and showing students how they dragged the coding blocks together to make Dash move. Then, the students got into their groups and took turns coding forward/fast. They gathered the students again on the rug to show the backward/slow motion and sent them in their groups again. The “show and do” format was repeated four times and helped focus the students to assure they knew the directions before working independently in their groups. The other motions covered were zig zag, back and forth and round and round. To create the movement of zig zag, we used the “Dance: Dash Confident” block that was pre programmed and had it loop. For back and forth, we coded a loop using forward and backward. The last movement created was round and round and it was programed by coding Dash to turn left 360° and loop three times.

After 40 minutes of Dash, it was time to pull out the Parrot Drone. The students experienced the up and down motion through a teacher demonstration. Harms coded and operated the Drone, while the students described the movements. They were thrilled to see the drone fly, hover, and maneuver unmanned above them.

Feldmann, Harms, and student teacher, Ali Saner used the station rotation model for more opportunities for hands on learning with the robots. Each station was around 10 minutes including transition time. Three of the stations were teacher led.

Teacher coded and operated Dash through motions: forward/backward, round and round, zig zag, and back and forth. As students observed, they recorded and narrated what they saw in SeeSaw. Here is a video of the students at this station.

Teacher coded and operated Drone. Students recorded and narrated the video describing the motions. These videos were shared in Seesaw. Here is a video of the kids at this station.

Can you find the path? This is an independent worksheet. 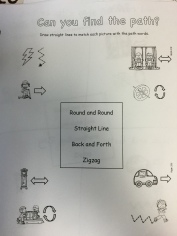 Each student had a robot to code using the previously learned motions and then tested the code on the robots. (4 dash robots needed) 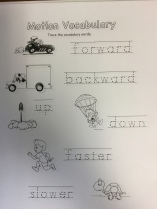 This activity took students to a new level of understanding within this objective. The activities allowed students to not only learn the objective, but to transfer the learning to coding the robots. The experiential learning solidified the concept and 95% of the students earned an advanced score on the assessment, one student who earned Proficient was absent Day 2. The center activities, both teacher guided and student guided, were appropriately timed so students could experience the successful completion of the activities or tasks. Applying the vocabulary as students coded or viewed Dash’s motions was a meaningful way to learn, reinforce and extend the science objective (SC2.2.2).

Let the students experience coding Dash by creating a course and then writing the code to move Dash through the course. This would be a fun challenge that would continue to build their coding skills and develop an increased understanding of movement.